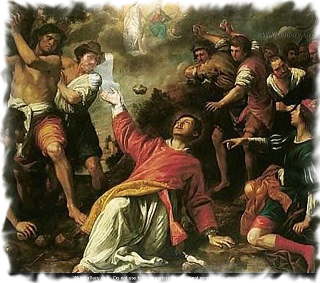 The greatness of God is hidden in his simplicity. He took the form of sinful man and came into the world, born of a woman after nine months in the womb. Submitted himself to every condition of earthly man. Suffered every abuse of the world and yet without sin, doing well to all. He finally died in the hands of sinful men for all of our sins. What humility and self denial for the sake of humanity. In simplicity Jesus Christ said in St. John 3:15, “That whosoever believeth in me should not perish, but have eternal life.” He is so simple and merciful to give us eternal life; by believing in him. He did not ask for anything difficult, did not ask for money or any material thing from anyone. Just believe in your heart and confess with your mouth that Jesus is your Lord and savior. Resistance to this simplicity of and in Christ Jesus leads to all the woes of the next three seals.

The fifth seal is the seal of martyrdom, and remember at this time, 2nd Thessalonians 2:7 has taken place, “For the mystery of iniquity doth already work: only he who now letteth will let, until he is taken out of the way and then shall that Wicked be revealed.” The one who letteth abides in the elect; and at this time of the fifth seal, he is taken out of the way because 1stThessalonians 4:16-17 has already occurred. The translation has occurred the elect is gone but some brethren are left behind the tribulation saints or the remnants of the woman. Revelation 12:13 and 17 come into play as the dragon, the serpent was wroth with the woman and went to make war with the remnant of her seed; this includes mostly the foolish virgins that took their lamps and no oil to last till the Lord arrived, Matthew 25: 1-10.

The elect is gone, the four beasts before the throne no longer introduced the seals, because the elect of every church age in mercy is gone in the translation, before the fifth seal. The serpent now is in a serious war mood, against anyone who is associated to Christ even remotely. This reads in Revelation 6:9, “And when he had opened the fifth seal, I saw under the altar the souls of them that were slain for the word of God, and for the testimony which they held.”

These were left behind in the translation but awakened to reality during the great tribulation and held to their faith. Some people who were not serious with their faith in Jesus Christ will wake up in the great tribulation and have a personal revival that strengthens them to become serious with their faith, even unto death. This is so because they know and realize that the only way to meet with the elect in glory is NOT to deny Christ Jesus even in the face of death. In verse 11, it reads, “And white robes were given unto everyone of them; and it was said unto them, that they should rest yet for a little season, until their fell servants also and their brethren, that should be killed as they were, should be fulfilled.”

The question is why going through such death, to meet with the Almighty God and the elect bride, when today; there is an easier and deathless way. “Harden not your heart as in the provocation, in the day of temptation in the wilderness: when your fathers tempted me, proved me, and saw my works forty years,” Psalm 95 and Hebrews 3. Today is the day to make peace with God by accepting Jesus Christ as your Lord and Savior; for tomorrow may be too late. When the fifth seal is opened, the rapture would already have occurred, and where will you be. The guillotine will be in operation at this time and the question will be different. Then it will be like this:

a.  Everyone will be required to take the mark, because no one can buy or sell and much more.
b.  If anyone takes the mark on their forehead, right hand, worship the image of the beast or take his name, the person closes all avenues to Christ and the doors of the Lake of fire awaits them.
c.  At this time people will be killed for accepting or professing Christ as Lord and Savior.
d.  More important is the fact that the Jews are the point of focus, Gentile time was over and the souls under the altar are those who were slain for:
i.  the word of God and
ii.  the testimony which they held.
e.  The translation is already over and God’s great tribulation judgment is about to increase.
f.  These souls held to testimony of their faithfulness to the law of God by Moses. The Jews were holding to the word of God by Moses, also expecting the Messiah.  But the foolish virgins of Gentile origin and who did not make the translation are caught up in the great tribulation with the Jews, and many will die for their faith in Christ then, but the Jews are the focus; the rapture train is gone already.

Brother Stephen was stoned to death, Acts of Apostle 7:55-60, and most of the apostles were martyred and many died through burning, stabbing, pulled apart by horses, skinned alive, stoned and maimed. In recent memory ISIS beheaded Christians. This will be nothing compared to what will happen in the fifth seal after the translation.

At this time it is important to know, that the translation has occurred and the great tribulation was stepping up, both are made manifest in Revelation 12:5 and 17. When the translation occurred in verse 5, (some also take it to be when Christ was born on earth) it reads, “and her child was caught up to God and to his throne.” At this time the child of the woman (Christendom) that is caught or translated is made up of the raptured saints and the foolish virgins are left behind.

In verse 17 of the same chapter, it reads, “and the dragon was wrath with the woman, (because the man child, or translated saints escaped him the dragon suddenly. The woman was given some help by the mercy of God) and went to make war with the remnant of her seed, which keep the commandments of God, and have the testimony of Jesus Christ.” At this point Jerusalem is where the dragon is staying among the Jews. The Jews are persecuted and killed for holding to the commandments of God by Moses and Christians who are left behind are killed for the testimony of Jesus Christ, if they confess Christ. This is the situation during the fifth seal. Take heed and do not miss the translation. Matthew 25:10-13, and when the foolish went to buy oil the bridegroom came and those that were ready went in with him to the marriage and the door was shut. The Great Tribulation goes into full gear.