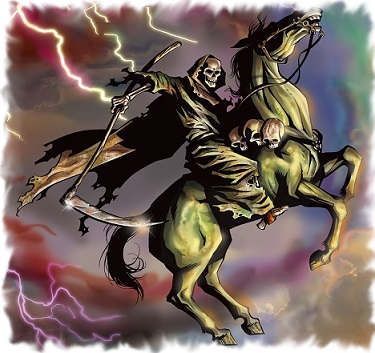 And when the LAMB, Jesus Christ, the Lion of the tribe of Judah opened the fourth seal, I heard, as it were the noise of thunder, one of the four beasts saying, “Come and see.  And I looked, and behold a pale horse; and his name that sat on him was Death, and Hell followed him. And power was given unto them over the fourth part of the earth, to kill with the sword, and with hunger, and with death and with the beasts of the earth,” (Revelations 6:1).

A. This seal is defined and makes from seal #1 to #3 very clear. The identity of the horse rider is revealed. The white, red and black colors of the horses show the concealed character and makeup of the real person behind the deceit. The color white, in this case, is false peace and spiritual death: red is war, suffering and death: and black is famine, hunger, thirst, disease, pestilence and death. Death is the common factor in all these; the name of the rider is Death.
According to William M. Branham and Neal V. Frisby; if you mix white, red and black colors in the same proportion or equal amount you end up with the pale color. I attempted to combine the colors just to be sure.  If you do not believe in the end result of combining the afore-mentioned colors, do your own experiment in order to be convinced. When you hear of pale then you know that death is present.

Death sat on the pale horse, which is manifesting all characteristics of the other three horses. He deceives with flattery, a bow and no arrows on his white horse. He stands for and behind all conflicts and wars even in homes as he rides the red horse. He thrives in killing by hunger, thirst, disease and pestilence. He brings all of the deceit open on the pale horse of death. You may ask what we know about death. Consider the following:

1. Death is a personality and manifests in many ways; and men dread it all through human history until Jesus Christ came to the Cross of Calvary and defeated disease, sin and death. In Genesis 2:17, God told man about death.

3. Death is an enemy, evil, cold and always oppressing people through fear.

4. Today death responds to its duty and desire promptly: anyone can be killed today by the hand of death but soon when the Great Tribulation starts death will act differently. Read Revelations 9:6, “And in those days shall men seek death, and shall not find it; and shall desire to die, and death shall flee from them.”

5. Revelations 20:13-14 reads, “And the sea gave up the dead who were in it; and death and hell delivered up the dead, who were in them,–And death and hell were cast into the lake of fire. This is the second death.“Does not fear death, for death itself will see death in the Lake of Fire?” Apostle Paul said, “O! Death, where is thy sting, (Death is swallowed up in victory),” 1st Corinthians 15:54-58.

B. Hell can be identified and associated in many ways.

2. Hell has enlarged itself.

3. What happens in hell?

In hell, men remember their earthly lives, their missed opportunities, errors made, a place of torment, thirst, and the vain lifestyles of this earth. Memory is sharp in hell, but it is all a memory of regret because it is too late, especially in the Lake of fire which is the second death.  There is communication in hell, and there is separation in hell. Read St. Luke16:19-31.

4. Who are in hell? All who reject their opportunities while on earth to confess their sins and accept Jesus Christ as Lord and Savior? All nations that forget God shall be turned into hell. According to Revelations 20:13, hell is a holding place, which will deliver the dead that are in it, at the White Throne judgment.

Death and Hell are companions in destruction and are in league with the false prophet and the anti-Christ.  After hell and death deliver those they are holding, for rejecting the word of God, Hell and Death were both cast into the Lake of fire and this is the second death; Revelations 20:14. Death and Hell were created and have an end. Do not fear death and hell, fear God.