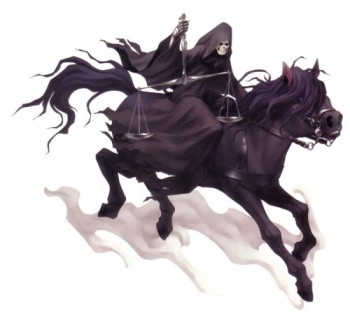 The same rider on the white and red horse is now on the black horse, in Revelations 6:5-6. The black horse rider is the secret in seal #3: which reads, “And when he had opened the third seal, I heard the third beast say, come and see. And I beheld, and lo a black horse; and he that sat on him had a pair of balances in his hand. And I had a voice in the midst of the four beasts say, A measure of wheat for a penny, and three measure of barley for a penny; and see thou hurt not the oil and the wine.” The horse is black and points to hunger, famine and rationing worldwide. This rider has no name yet.

1. This black horse rider has a pair of balances in his hand. These points to the terrible situation that will be worse than the Dark Ages, in a short time. There will be serious famine for food, and the word of God.

a. Food will be scarce because weather conditions will be unfavorable. Rain will be almost absent and water will be among the resources controlled. Remember that the prophets can shut the heavens that it does not rain.

b. The word of God will be scarce because of spiritual bankruptcy. The false church is gradually controlling all churches in the world. Spiritual Babylon the Catholic Church system is gradually swallowing other denominations. They will soon be in total control and will measure out both food and forgiveness of sin for money, as in past church and world history.  This measure of wheat for a penny will end up as a measure of wheat for the mark 666. The present King James Bible will be changed and eventually prohibited, as famine for the word of God sets in.

2. The words “balances”and “measures”come into play and he had the balances in his hand.

a. Having the balances and measures in his hand means he is in total control as allowed by God. He sets up conditions, organizations and people to execute the program initially as philanthropic efforts. Later, he issues the mark 666 or death. These activities will have religious tones because the anti-Christ and the false prophet will combine church and politics and bring everyone under strict control.
b. Measure means you cannot get any amount you need and also means absolute control; at the mercy of the black horse rider and his group, if they have any mercy in them. He is merciless. He kills with hunger, thirst, and starvation. Food and water are rationed for the world.

c. Balances denote weighing the pros and cons of the situation. Are you for the Lord Jesus Christ or not? Who are those who put themselves in a situation to look up to the black horse rider for food or spiritual need?  The answer is simple, those who reject the word of God, Jesus Christ. They end up taking the mark or the name or the image in their forehead or right hand or worship the beast, the anti-Christ. When you do this you are totally separated from God. Think about it, a life without Christ.

d. The black horse rider has been riding and intensifying his devastation. It is hunger at every level, even USA the food center of the world will see a crippling famine and destruction of food crops. Many nations are getting free food from the USA; nations like Sudan and other African nations, Asia and parts of Middle East.

e. This horse rider is behind the so called genetically engineered food crops. I had some unpleasant experience in the past few years. I bought some okra seeds from a store that sells seeds in packets. I planted it and had a great harvest and even saved some of the seeds to plant the next year. The second year I planted the harvested seeds and had less than 10% of the previous year. In the third year I had less than 1% of harvest and in the fourth year less than 0.5% of the seeds germinated and I had 0% harvest. This is one of the techniques that the black horse rider and his conscious or unintentional assistants (some scientists) employ to create hunger and ride into the mark of the beast. Anyone left behind after the translation (rapture) will suffer hunger and there will be only 3 alternatives:

i. Die of hunger.

ii. Hope on surviving in the wilderness with angelic help from God;

Remember that pollution is already having a devastating impact on our water and soil. Add the effect on these two to our genetically engineered seeds and consequently our harvest and later rationing. A measure of wheat for a penny will be the outcome. Also, bear in mind that a whole day’s wage cannot buy a loaf of bread. Pray not to be here for the great tribulation, when this will really be clear and stinging like a scorpion.
Water will be an important factor, the two prophets of Revelations 11, have power to shut the heavens that it does not rain on earth. This will intensify the climatic conditions and increase famine and hunger.

This will make the man on the black horse to ration food more. Also when the waters turn into blood both men, beasts, and plants will see and experience dehydration, starvation and death. Water and food will be scarce commodities on earth soon. The Gospel Train is riding and do not be left behind at the rapture. Get on board today by confessing your sins and inviting Jesus Christ into your life to be your sole Ruler, Savior and Lord.