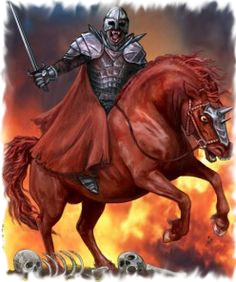 Revelations 6:3-4 reads, “And when he had opened the seconds seal (REMEMBER that only Jesus Christ the Lamb of God , the Lion of the tribe Judah had prevailed and was qualified to open the seals and reveal the secrets), one of the four beast before the throne of God, invited John to come and see.”

Verse 4 reads, ” and there went out another horse that was red: and power was given to him that sat thereon to take peace from the earth, and that they should kill one another: and there was given him a great sword.” This horse rider has been riding for a while but it is all coming to a head. When people fall for the deception of the white, religious and supposedly peaceful arrowless white horse rider, God gives them up. This white horse rider also kills some true people of God, pretending to do God a service. The red horse rider is strange, in that he does the opposite of what the white horse does. The rider comes to kill; blood is red and he has a sword. Watch these characteristics of the red horse killer:

a. This rider comes on a red horse, strange, because the color of blood is red and related to war.

b. This rider is allowed to take peace away from the earth, because men have rejected Christ.

c. This rider is given a sword, and allowed to cause men to kill one another on the earth.

d. The sword can be seen here as a weapon of destruction, he is allowed to kill by creating and executing wars. Wherever there is war, there is killing, bloodshed and death.

f. The red horse rider is using the sword in another way. The true sword is the word of God that gives Eternal Life, but the other sword gives death. It is a lie and not the saving true word of God. He uses this sword to confuse the people, create wars and allow blood and death to flow upon the earth.

h. Every part of the world is now going through a kind of warfare or another. Some are preparing for war. A brief research into the kinds of weapon under development today will show that the whole thing is in readiness for the Armageddon. Just imagine the kinds of weapon that are out there; different types of guns, dangerous gases, biological weapons of different forms; all these are war agents that bring nothing but bloodshed and death. The military airplanes of today carry death and not life. Look at the drones, the warheads, the nuclear plants and the fear in the heart of men. Death is at every corner. The real prince of peace is the Lord Jesus Christ. Have you found him?

i. Abortion is another war going on and the red horse rider is behind all these bloodshed. The main issue in this war is that these babies have no fighting chance. Their own mothers, in whose wombs they were they were supposed to be protected are part of the enemy or the red horse rider. The blood of innocent babies is shed each day, in millions. Lest I forget, the blood of Abel was crying unto God, so also the blood of the innocent children is crying out to. God is not deaf, judgment is coming. The blood of these babies is crying out and speaks to God. Blood flows, read Revelations 14:20.