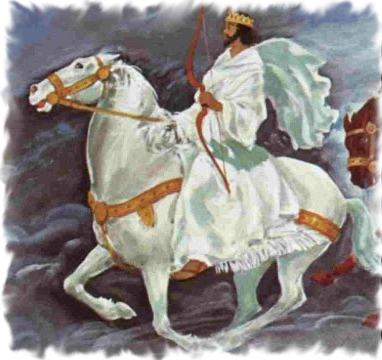 The seven seals show conditions that will exist in the world at the end of time.  From the glorious translation of the elected saints, through the tribulation, to the second coming of the Lord in the millennium. Finally from the White Throne judgment to the New heaven and the New earth. Everyone in the world will face some or all of these conditions at different levels, and the severity and consequences will depend on each individual’s personal relationship with Jesus Christ. Very soon the world will be engulfed with fear, famine, pestilences, war and death.

Seal number one is found in Revelation 6:1-2; and reads, “And I saw when the Lamb (The Lord Jesus Christ), opened one of the seals, and I, John heard, as it were the noise of thunder, one of the four beasts saying come and see. And I saw, and behold a white horse: and he that sat on him had a bow; and a crown was given unto him: and he went forth conquering, and to conquer.” This rider has characteristics that make him identifiable and they include the following:

a. This rider has no name. Christ always makes himself known, Revelations 19:11-13.
b. This rider has a bow which is associated with religious conquest. So, he has a religious tone.
c. This rider has no arrows to go with the bow. This shows deception, false peace and a lie.
d. This rider had no crown to begin with, but was given a crown later. This happened after the Nicene Council, where the horse rider got his  crown and assumed power over the laity. This horse rider started as a spirit but became crowned in a religious system as a pope. You cannot crown a spirit. Read Daniel 11:21 which tells you how this rider operates, “he shall come in peaceably and obtain the kingdom by flatteries.” This is the anti-Christ in manifestation. If you were asked if you are a Christian and you mentioned the name of any denomination, such as I am a Baptist etc, you might be under the influence of the white horse rider. A Christian is a person with a personal relationship with Jesus Christ, not a denomination.
e. This rider appears harmless, innocent, holy or religious, caring and peaceful; able to confuse and deceive those without understanding. He has a bow, a weapon of war  and conquest, but no arrows. This rider with a bow and without arrows (word of God) represents  falsehood as he goes forth to conquer.

This mysterious horse rider with his crown given to him; uses crafty doctrines, programs and wealth to conquer the masses. It is called by the Holy Spirit, in Revelations 2:6 “the deeds of the Nicolaitans.” Yes, the Spirit say , “which I also hate.” Nico means  to conquer; Laity means the church and its membership. This means that this white horse rider, rides on, conquering and to conquer the laity using religious creeds, rituals, deeds and doctrines, teaching for doctrine the commandments of men.

(Read Revelations of the seven seals by William Marion Branham)

This religious rider, through flatteries and religious cover on a white horse gives false words contrary to the true word of God. By this, many are deceived and reject the true word. When this happens, the Lord said  in 2nd Thessalonians 2:9-11 that, “He gives them over to a reprobate mind and a strong delusion that they should believe a lie, so that they all might be damned who believed not the truth.”

This rider on this white horse with a bow and no arrows is the anti-Christ. The real rider on the real white horse is found in Revelations 19:11, ” And I saw heaven opened, and behold a white horse; and he that sat upon him was called Faithful and True, and in righteousness he doth judge and make war.”  This is our Lord Jesus Christ.