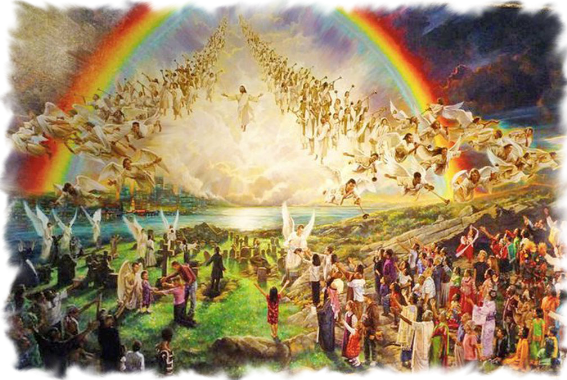 a. They are called the servants of God, (only the Israelites).  Gentiles are not called servants.
b. They have the seal of God in their foreheads.
c. They are all of the tribes of Israel. They are not Gentiles.
d. They are on earth all through the great tribulation and not in heaven.

It is good to take note of the following:

The 144,000 of Revelation 7 are connected to Rev:7-14, which reads,—“These are they which came out of great tribulation, and have washed their robes, and made them white in the blood of the Lamb.” They came out of great tribulation with the sealed 144,000 of the tribes of Israel. Verse 9  (after sealing the 144,000) reads, ” I beheld, and, lo, a great multitude, which no man could number, of all nations and kindred’s, people and tongues, stood before the throne, and before the Lamb, clothed with white robes, and palms in their hands.” The 144,000 of Revelation 7 are connected with the people in Rev: 12:17 which reads, “And the dragon was wroth with the woman, and went to make war with the remnant of her seed, which keep the commandments of God, and have the testimony of Jesus Christ.” These remnants of the woman includes those in Matt.25:1-10, who, when they went to buy oil the Bridegroom came and those who were ready went in for the marriage. This is the Translation and they missed it. Now they have to go through the great tribulation to be purged for missing the rapture. Remember that missing the rapture has to do with the kind of relationship you have with Jesus Christ.

The 144,000 of Revelation 14 constitutes another group. I will make references to the Bible and the revelations of the messenger of the Seven Thunders.

The characteristics of this group are:

Here is why they are a special group:

1. They are called virgins. This means that they are not joined to great organizations. It does not pertain to earthly marriage, that involves physical virgins, male or female. Virgins here deals with spiritual purity in committing only to Christ Jesus not denominationalism. Imagine when asked, are you a Christian? And you answer yes, I am a Baptist, Roman catholic, Pentecostal, or Wesleyan Methodist, etc. Even those considered virgins in Matt.25, slumbered and slept. When they woke up by the cry at mid night, some were found wise and some foolish. Which are you? Most important question to ask is, who are the voice that gave the cry at midnight? The bride has to be awake for her wedding and not go to sleep. The friends and close associates of the bride, are likely with the bride and awake. The Bridegroom is the one expected and he is the center of the whole marriage. When He arrives the door will be closed for the marriage. Those who were ready went in with the Bridegroom. Those who went to by oil were left outside the marriage. When the Lord returns during the rapture, those who miss it are those left outside when the Bridegroom closes the door. The Great tribulation awaits all who miss the rapture.
2. They had his Father’s name on their forehead, John 5:43.
3. There is no guile in their mouth.
4. They sing a new song which no one else can sing, except them.
5. They are first fruits unto God.
6. They know what the name of God is, the Lord Jesus Christ. (Not 3 different names as father, son, holy ghost; these three manifestations are bodily in the Lord Jesus Christ.
7. They are associated to the Thunders and the Great Thunder in Rev. 14:2.

The scroll message is exactly what was promised to come and unless people are predestined they will not believe or receive the scrolls. The scroll is to separate and prepare the Elect for the rapture.

Bro. Branham wrote that the 144,000 of Rev. 7 were killed and suffered martyrdom during the great tribulation. He also preached that the group of 144,000 found in Rev. 7 and Rev. 14, were the same group. Remember the messenger of the first six seals and the writer of the 7th seal are different.

Bro. Frisby preached that the 144,000 of Rev. 7 were sealed and not harmed all through the great tribulation. Remember Rev. 7:2-3 said, “not to hurt  the earth, neither the sea, nor the trees, till we have sealed the servants of our God in their forehead.” He also wrote that the two groups of 144,000 are not the same; one is Israelites (servants of God) and the other is Gentiles (the redeemed of all nations, tongues, kindred and people).

Now O! reader, search the scriptures that you may find for yourself what you believe through prayers. Time is running out. Do not let your lamp go off, for the midnight hour is upon us. Will you go in with the Bridegroom or will you go to buy oil and get purged as the great tribulation starts. The choice is yours. JESUS CHRIST IS LORD OF ALL. AMEN