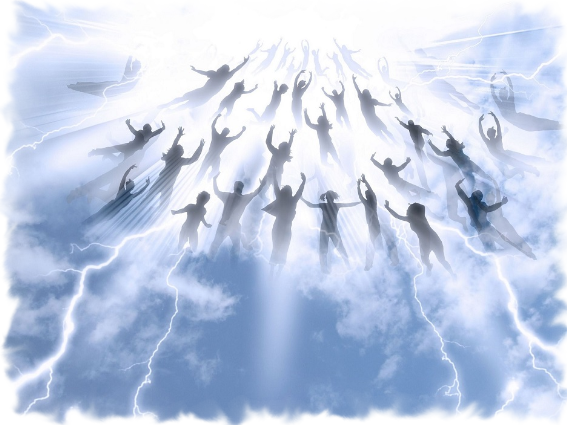 Let us examine the personage found in Revelation 10. This will be absolutely necessary because the book found in the right hand of him that sat on the throne, written within and on the backside, sealed with seven seals; and taken by the Lamb in Revelation 5, is now seen in Revelation 10 in the hand of  another mighty angel. The Godhead is a hallmark of the Christian faith. God manifested himself in various forms, as the Father (God), the Son (Jesus) and as Holy Spirit (the anointed one-Christ). God the Father is a Spirit and cannot be seen in human form. The Holy Spirit cannot be seen in human form. The Son is the only one in human form. In Jesus Christ is the fullness of all the Godhead bodily, Colossians 2:9.

In Revelation 10, this deity form comes down from heaven clothed with a cloud, which signifies supreme deity. A rainbow (which means God’s promise) was upon his head, and his face was as it were the sun (it is a sign of the King releasing a royal message), and his feet as pillars of fire.  The picture of the Mighty figure shows how God has hidden and manifested Himself to man for 6000 years (Revelation 10:1-11). The seventh seal is a message ushering in the beginning of the seven thunders, the capstone anointing and end time ministry. Bro. Frisby wrote in scroll # 23 part one:  “What I am doing in Revelation 10, is explaining secrets of a written message now going forth. There was a swift deliverance and woe prophesying that time is short. Somewhere between the time the little book of scroll are seen and the Thunders the rapture takes place.  And that judgment is soon to begin under the two witnesses.”

A written message is connected to the 7th seal, a silent message (written). Bro. Frisby wrote that the Church Age ends in this seal, the 7 Thunders, the 7 vials; the plagues and even time will end under this 7th seal! Mystery! Now about the time the 7 Thunders start the elect will suddenly run (unite together) to receive Christ at His return. Thunder! Storm is coming run to Jesus. WHEN THE MIDNIGHT CRY WAS GIVEN IN MATTHEW 25:5, THE FOOLISH AND THE WISE WERE BOTH ASLEEP.  But the brides (wise) were sealed. They received (God’s Seal—rain–revival, word and power) because they had the oil (spirit). Now something they received in the thunders that the foolish did not see or hear: THE UNWRITTEN MESSAGE WOULD BE WRITTEN AND SENT TO THE BRIDE AT THE END. Scroll #26 reads, “Jesus tells me now the Bride will put on a bright anointing, reading the scroll (with the Bible) in His spirit. The covering “oil”(the anointing) to receive life at Christ’s appearing (Psalm 45:7, Isaiah 60:1-2 and Heb.1:9).

The only place the word scroll is used in the book of Revelation is after the sixth seal, (Revelation 6:14) Jesus did this to show the 7th seal was connected to the scroll message. The scroll must be spiritually understood. Revelation 8:1, the seventh seal silence seals the Bride. This seventh seal covers more than the translation. Under the Seventh Seal and the 7 Thunders all that Adam lost is restored (Rev. 21:1). Under this seal Satan is sealed in the pit, Rev.20:3. Under this important 7th Seal even the written word (Bible) turns back into the spoken Word (Jesus the Christ). And He is restored to the true Lord of all the earth. The unwritten key message of the Thunders fills in the silence and becomes a revelation message under the 7th Seal. It is the thing Satan did not need to know about (the rapture) and how God will call, separate and seal the Bride, and also certain events that will end the world. The 7th Seal, seals the Bride with the signature of God, “THE LORD JESUS CHRIST,” Amen.

During the Holy Spirit sealing of the 7th Church Age (Bride), it was quiet in heaven; all activity was in the thunders on earth, (Rev. 10:4). Jesus Christ had left the throne to claim (seal) His Bride and later possess the earth also.  The 7 Thunders is when the unwritten message is fulfilled. The vacant space that was closed up is to be revealed to the Elect at the end of the age. This space is for all those in the Bride work that the spirit seals in. This part of the Bible that was hidden will be fulfilled in God’s saints at the end. According to Neal Frisby,” THUS SAITH THE LORD, THIS IS THE HOUR I HAVE CHOSEN TO REVEAL THE UNWRITTEN THUNDERS.” If this is the hour, what do you as an individual know about the Seven Seals and the Seven Thunders? What part are you playing, are you pecking with the chicken or are you soaring with the eagles?

This 7th seal and these “7 thunders” are not just connected to the quick short bride work. Secrets leading to the rapture take place here, the first six seals finish here, the 7th Church ages finish here. The seven star messengers finish here. The 7 trumpet and 3 woes end here. The two witness of Rev. 11 appear here, the 7 last vial plagues finish here (Rev. 15:8). It contains all the written and unwritten mysteries of God, which are fulfilled in the 7 Thunders.
The third call (last pull) is when God seals the Bride. The scrolls are sent to a special group who believe and are sealed for a special anointing. They support and help give the midnight cry (Matt. 25).

I hope this message has put in you a compelling desire to search into the truth of the seventh seal and the seven Thunders. If it does not compel you, may be it does not belong to you and you are not part of this revelation and fulfillment. Read Hebrews 12:23-29. The seventh seal and seven thunders are made up of open secrets. Remember, it is said that the best way to hide a thing is to keep it in the open. These secrets are numerous, here a little there a little, line upon line and precept upon precept. You must by the help of the Holy Spirit search them out. The following are some of the signs of the end time that match the scriptures and point to the return of Christ:

a. Religious deceits and control of the masses. People are becoming more religious than ever but not according to the ways of the scriptures. Religious groups are incorporating New Age practices and rituals into their worships. Satanism is becoming attractive to the youths and is sneaking gradually into the churches.

b. Politics and religion are getting married and the boundaries are fading. Soon, the USA will produce the False Prophet. Already many religious groups are encouraging their members to join politics to change things and the world. The scripture states clearly, come out from among them and be ye separate, also the messenger of the Seven Thunders warns about these events. Search the message of the Thunders and you can read more.

c. Economic conditions of these last days and the collapse of the present

d. Famines that will plague the world. Hunger is coming.

e. Different kinds of diseases will appear and overcome the medical community.

f. Immorality, drugs, role models, sex, the movie industry music and religion will all mix into one hot and demonic mess you can ever imagine.

g. Youth will rebel. Parents will be helpless. Government laws will encourage youth rebellion in the name of freedom.

h. Science and technology will be in the forefront at the coming of Christ and will all match the scripture and the secrets of the Seven Thunders. Case in point, the computer: hand set (present smart phones), matches the scripture Revelation 11 and the message in scroll # 125.

j. Certain new islands will appear out of the seas and some present islands will sink into the sea or ocean; disappearing with everything on them for good. Remember the island that came out of the sea a few years ago after the earthquake in Pakistan area; more will occur.

k. Revivals in the churches, among religious people and among the true Bride of Christ will be occurring among the various groups. The Bride will know who Jesus Christ is, the God of all.

l. The California big quake that will take San Francisco, Los Angeles and much more. This will also lead to the rise of the sodomites.

m. Families will fall apart. Divorce rates will be unbelievable, even among Pentecostals and pastors or ministers approaching the Translation and the coming of the Lord. People should show moderation in their marital sexual relationship.  You must balance these scriptures for your own good

1) 1st Corinthians 7:5 reads, “Defraud ye not one the other, except it be with consent for a time, that ye may give yourselves to fasting and prayer; and come together again, that Satan tempt you not for your incontinency,(lack of self control).

2) 1st Corinthians 7:29 reads, “But this I say, brethren, THE TIME IS SHORT: it remaineth, that both they that have wives be as though they had none.”  This is important today, do not make sex a daily diet and more important than the peace of God. If you can pray before meals you also need to pray before sex, committing your emotion to the Lord, for self control.

n. Drugs will mess up lives, because people put their confidence in anything that makes them high or quick fixes. Alcohol and gurus will run rampant, taking the masses captive with religious rituals and sexual perversions.

There are much more signs of the end hidden in the message of the Seventh Angel and the Seven Thunders; search them out while you can.  The messengers have come and gone but the messages are here and the prophecies fulfilling each day. Do not be caught in the snares of the devil.