The secret marking – the qualified were marked 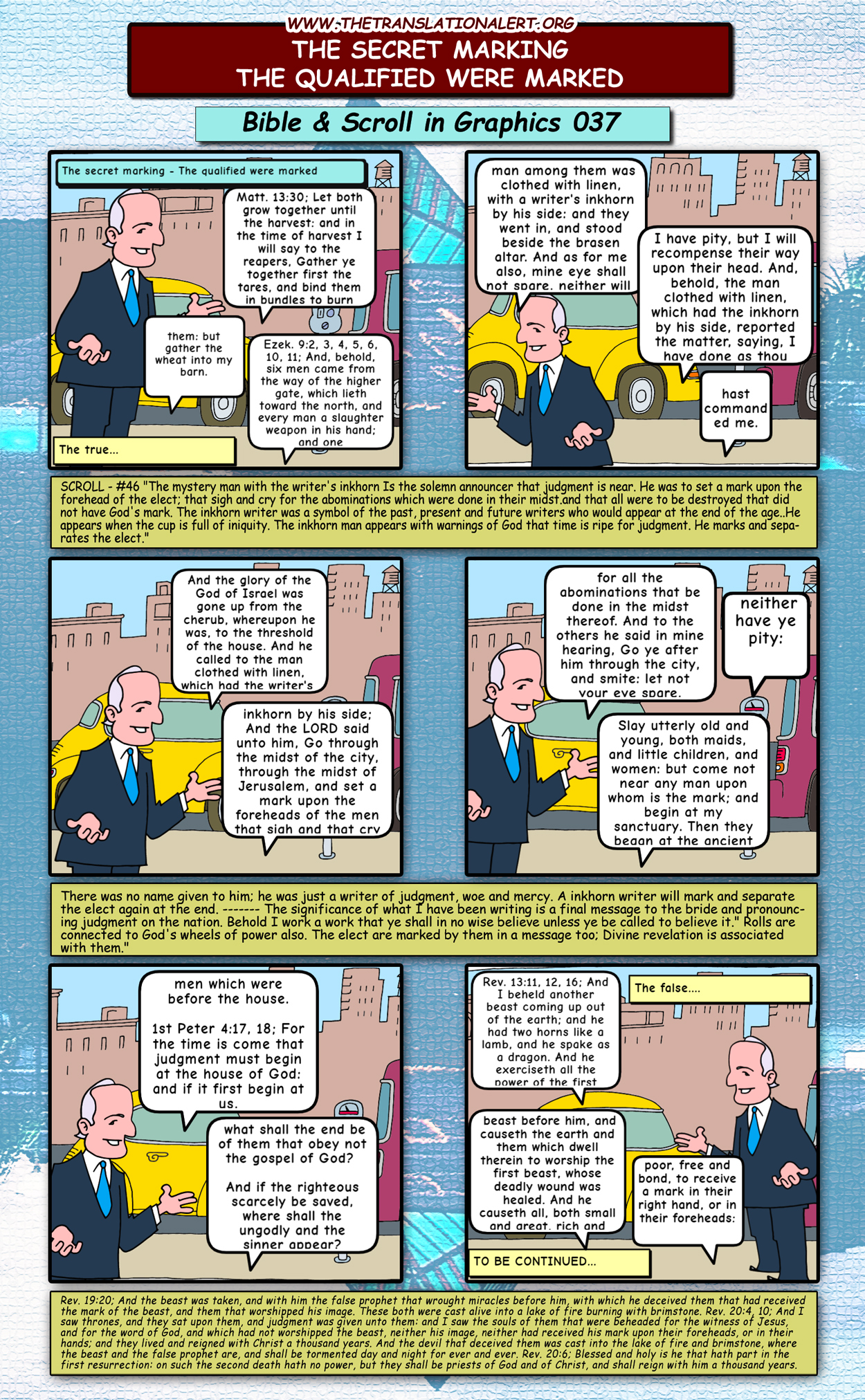 Matt. 13:30; Let both grow together until the harvest: and in the time of harvest I will say to the reapers, Gather ye together first the tares, and bind them in bundles to burn them: but gather the wheat into my barn.

The True – Ezek. 9:2, 3, 4, 5, 6, 10, 11; And, behold, six men came from the way of the higher gate, which lieth toward the north, and every man a slaughter weapon in his hand; and one man among them was clothed with linen, with a writer’s inkhorn by his side: and they went in, and stood beside the brasen altar. And as for me also, mine eye shall not spare, neither will I have pity, but I will recompense their way upon their head. And, behold, the man clothed with linen, which had the inkhorn by his side, reported the matter, saying, I have done as thou hast commanded me.

And the glory of the God of Israel was gone up from the cherub, whereupon he was, to the threshold of the house. And he called to the man clothed with linen, which had the writer’s inkhorn by his side;

And to the others he said in mine hearing, Go ye after him through the city, and smite: let not your eye spare, neither have ye pity:

Slay utterly old and young, both maids, and little children, and women: but come not near any man upon whom is the mark; and begin at my sanctuary. Then they began at the ancient men which were before the house.

1st Peter 4:17, 18; For the time is come that judgment must begin at the house of God: and if it first begin at us, what shall the end be of them that obey not the gospel of God?

And if the righteous scarcely be saved, where shall the ungodly and the sinner appear?

Rev. 13:11, 12, 16; And I beheld another beast coming up out of the earth; and he had two horns like a lamb, and he spake as a dragon. And he exerciseth all the power of the first beast before him, and causeth the earth and them which dwell therein to worship the first beast, whose deadly wound was healed. And he causeth all, both small and great, rich and poor, free and bond, to receive a mark in their right hand, or in their foreheads:

Rev. 19:20; And the beast was taken, and with him the false prophet that wrought miracles before him, with which he deceived them that had received the mark of the beast, and them that worshipped his image. These both were cast alive into a lake of fire burning with brimstone.

Rev. 20:4, 10; And I saw thrones, and they sat upon them, and judgment was given unto them: and I saw the souls of them that were beheaded for the witness of Jesus, and for the word of God, and which had not worshipped the beast, neither his image, neither had received his mark upon their foreheads, or in their hands; and they lived and reigned with Christ a thousand years. And the devil that deceived them was cast into the lake of fire and brimstone, where the beast and the false prophet are, and shall be tormented day and night for ever and ever.

Rev. 20:6; Blessed and holy is he that hath part in the first resurrection: on such the second death hath no power, but they shall be priests of God and of Christ, and shall reign with him a thousand years.

“The mystery man with the writer’s inkhorn Is the solemn announcer that judgment is near. He was to set a mark upon the forehead of the elect; that sigh and cry for the abominations which were done in their midst.and that all were to be destroyed that did not have God’s mark. The inkhorn writer was a symbol of the past, present and future writers who would appear at the end of the age..He appears when the cup is full of iniquity. The inkhorn man appears with warnings of God that time is ripe for judgment. He marks and separates the elect.”

b)There was no name given to him; he was just a writer of judgment, woe and mercy. A inkhorn writer will mark and separate the elect again at the end.

c) ” The significance of what I have been writing is a final message to the bride and pronouncing judgment on the nation. Behold I work a work that ye shall in no wise believe unless ye be called to believe it.” Rolls are connected to God’s wheels of power also. The elect are marked by them in a message too; Divine revelation is associated with them.”

037 – The secret marriage for the chosen, called and faithful – in PDF