The revelation of the age old mystery 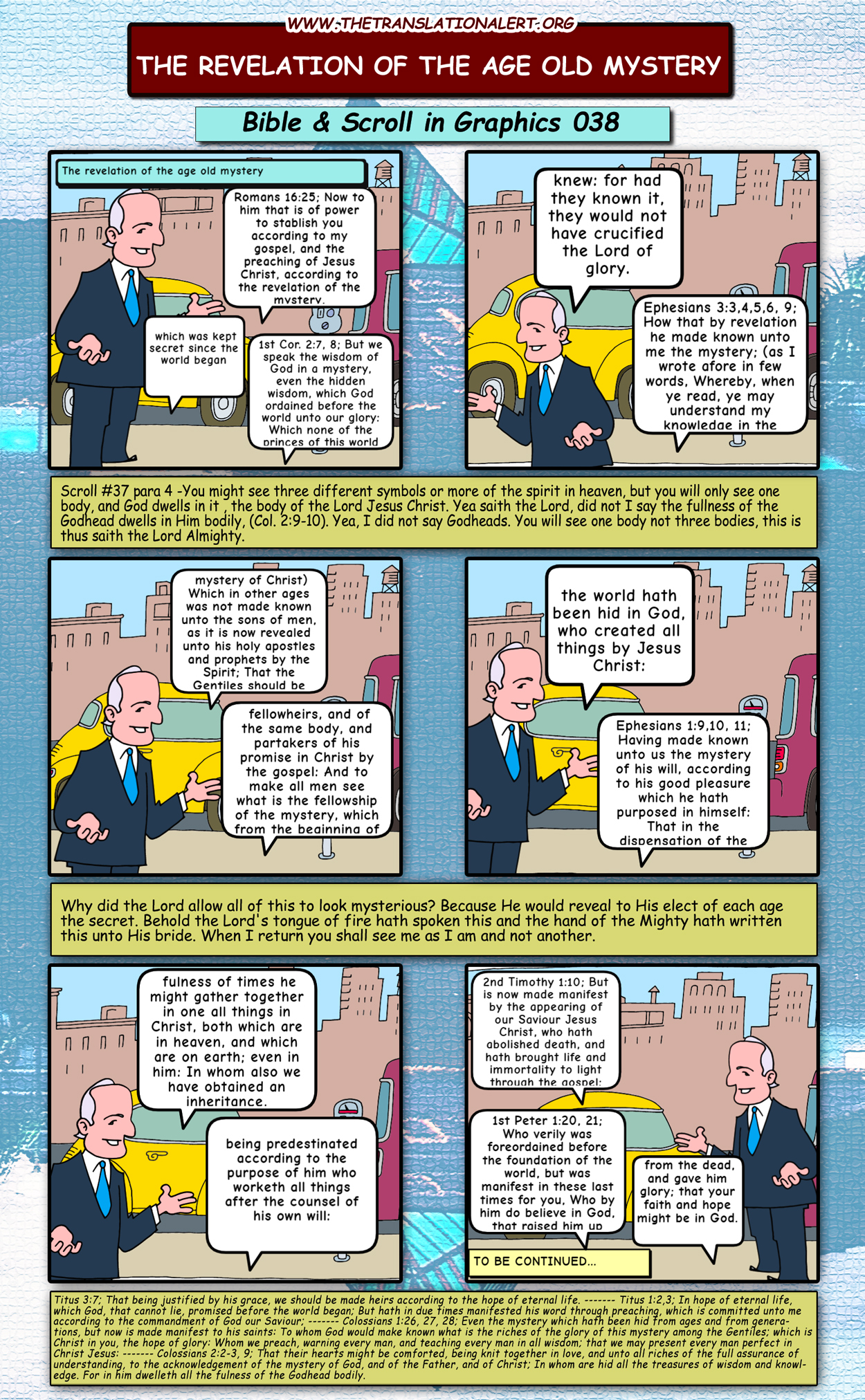 Romans 16:25; Now to him that is of power to stablish you according to my gospel, and the preaching of Jesus Christ, according to the revelation of the mystery, which was kept secret since the world began

1st Cor. 2:7, 8; But we speak the wisdom of God in a mystery, even the hidden wisdom, which God ordained before the world unto our glory: Which none of the princes of this world knew: for had they known it, they would not have crucified the Lord of glory.

Ephesians 3:3,4,5,6, 9; How that by revelation he made known unto me the mystery; (as I wrote afore in few words, Whereby, when ye read, ye may understand my knowledge in the mystery of Christ) Which in other ages was not made known unto the sons of men, as it is now revealed unto his holy apostles and prophets by the Spirit; That the Gentiles should be fellowheirs, and of the same body, and partakers of his promise in Christ by the gospel: And to make all men see what is the fellowship of the mystery, which from the beginning of the world hath been hid in God, who created all things by Jesus Christ:

Ephesians 1:9,10, 11; Having made known unto us the mystery of his will, according to his good pleasure which he hath purposed in himself: That in the dispensation of the fulness of times he might gather together in one all things in Christ, both which are in heaven, and which are on earth; even in him: In whom also we have obtained an inheritance, being predestinated according to the purpose of him who worketh all things after the counsel of his own will:

2nd Timothy 1:10; But is now made manifest by the appearing of our Saviour Jesus Christ, who hath abolished death, and hath brought life and immortality to light through the gospel:

1st Peter 1:20, 21; Who verily was foreordained before the foundation of the world, but was manifest in these last times for you, Who by him do believe in God, that raised him up from the dead, and gave him glory; that your faith and hope might be in God.

Titus 3:7; That being justified by his grace, we should be made heirs according to the hope of eternal life.

Titus 1:2,3; In hope of eternal life, which God, that cannot lie, promised before the world began; But hath in due times manifested his word through preaching, which is committed unto me according to the commandment of God our Saviour;

Colossians 1:26, 27, 28; Even the mystery which hath been hid from ages and from generations, but now is made manifest to his saints: To whom God would make known what is the riches of the glory of this mystery among the Gentiles; which is Christ in you, the hope of glory: Whom we preach, warning every man, and teaching every man in all wisdom; that we may present every man perfect in Christ Jesus:

Colossians 2:2-3, 9; That their hearts might be comforted, being knit together in love, and unto all riches of the full assurance of understanding, to the acknowledgement of the mystery of God, and of the Father, and of Christ; In whom are hid all the treasures of wisdom and knowledge. For in him dwelleth all the fulness of the Godhead bodily.

Scroll #37 para 4 -You might see three different symbols or more of the spirit in heaven, but you will only see one body, and God dwells in it , the body of the Lord Jesus Christ. Yea saith the Lord, did not I say the fullness of the Godhead dwells in Him bodily, (Col. 2:9-10). Yea, I did not say Godheads. You will see one body not three bodies, this is thus saith the Lord Almighty.

Why did the Lord allow all of this to look mysterious? Because He would reveal to His elect of each age the secret. Behold the Lord’s tongue of fire hath spoken this and the hand of the Mighty hath written this unto His bride. When I return you shall see me as I am and not another.