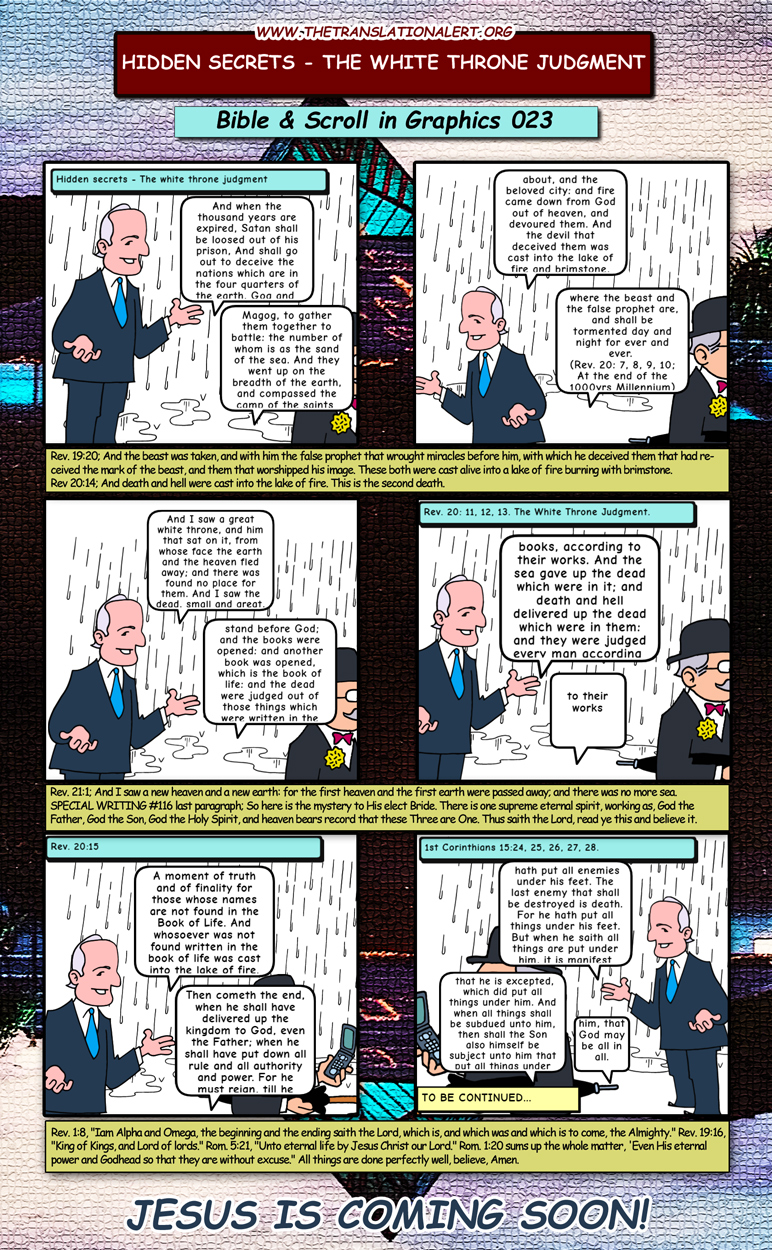 And when the thousand years are expired, Satan shall be loosed out of his prison, And shall go out to deceive the nations which are in the four quarters of the earth, Gog and Magog, to gather them together to battle: the number of whom is as the sand of the sea. And they went up on the breadth of the earth, and compassed the camp of the saints about, and the beloved city: and fire came down from God out of heaven, and devoured them. And the devil that deceived them was cast into the lake of fire and brimstone, where the beast and the false prophet are, and shall be tormented day and night for ever and ever.

And I saw a great white throne, and him that sat on it, from whose face the earth and the heaven fled away; and there was found no place for them. And I saw the dead, small and great, stand before God; and the books were opened: and another book was opened, which is the book of life: and the dead were judged out of those things which were written in the books, according to their works. And the sea gave up the dead which were in it; and death and hell delivered up the dead which were in them: and they were judged every man according to their works.

Rev. 20:15; A moment of truth and of finality for those whose names are not found in the Book of Life.

And whosoever was not found written in the book of life was cast into the lake of fire.

Rev. 19:20; And the beast was taken, and with him the false prophet that wrought miracles before him, with which he deceived them that had received the mark of the beast, and them that worshipped his image. These both were cast alive into a lake of fire burning with brimstone.

Rev 20:14; And death and hell were cast into the lake of fire. This is the second death.

Rev. 21:1; And I saw a new heaven and a new earth: for the first heaven and the first earth were passed away; and there was no more sea.

SPECIAL WRITING #116 last paragraph; So here is the mystery to His elect Bride. There is one supreme eternal spirit, working as, God the Father, God the Son, God the Holy Spirit, and heaven bears record that these Three are One. Thus saith the Lord, read ye this and believe it. Rev. 1:8, “Iam Alpha and Omega, the beginning and the ending saith the Lord, which is, and which was and which is to come, the Almighty.” Rev. 19:16, “King of Kings, and Lord of lords.” Rom. 5:21, “Unto eternal life by Jesus Christ our Lord.” Rom. 1:20 sums up the whole matter, ‘Even His eternal power and Godhead so that they are without excuse.” All things are done perfectly well, believe, Amen.