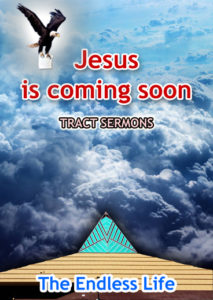 TIME IS RUNNING OUT, JOIN THE TRAIN NOW!!!

The world is changing and many people will be late in avoiding what is coming. Have you ever been late in any aspects of life? What were the consequences you encountered during that dark phase? Time and limitations came into full existence when man fell from the lorry in the Garden of Eden and lost his first estate, prior to putting on immortality and eternity through God’s own perfect plan for mankind. Since then, man has been limited by time and we came into full actualization of words such as “early, in time, on time, off late, later, a minute late, seconds late”, among others.

The caption of this tract can be likened to a farmer who planned to harvest his crops before sunsets. And all through the day, he got caught up in other businesses that took away his consciousness of what has been originally planned. At midday, he regains his consciousness and discovers how much time he had wasted in things that did not really matter. He strove harder to make it to the farm and harvest before his farm produce would go bad and stale. The farmer in this case was not too late until he decided to give up on his set goals.

Lateness in decision making regarding joining the Christ family depends on you. For all have sinned and fallen short of the glory of God, (Romans 3:23). We were as sheep led astray just as the farmer was taken off his focus, but are brought back into the consciousness of our heavenly focus and the time we are living in: often called the last days.

Prophecies regarding the second glorious appearing of our Lord Jesus Christ (the rapture) are being fulfilled, are fulfilling and this generation shall not pass away seeing these prophecies fulfilling in our time (Luke 21: 32 and Matt. 24). The joy of the second coming of our Lord has however grown cold and dormant in the hearts of many; even believers, mocking and scoffing his glorious return, (2nd Peter 3: 3- 4). The world has lost consciousness and focus of eternity with Christ when he appears, and has gone into sin, strife, wars, corruptions, misunderstanding, confusions, chaos, unbelief, greed, envy, wickedness among others. The good news here is God has made us children of light so darkness will not engulf us, (1st Thessalonians 5: 4 -5). Glory to God!!! Make the decision now, since it’s not too late until it is late.

Come into the consciousness of his second coming and act appropriately and accordingly so when he appears, you will not be found lagging. Psalm 103: 15 expounds that the days of man are like grass which flourishes like the flower of the field. At an appointed time, it goes out of season. His days are full of events in and out of seasons. There is always a flourishing time in our lives and we must make good use of that for there are unfavorable times ahead. Therefore, give all of yourself up to witnessing and drawing more souls into the kingdom of God because a time comes when man cannot work anymore (John 9: 4).

Beloved in Christ, make your decision now before it becomes very late. God is real and so are his sayings and promises. He shall appear the second time to take his own into eternity. It is not how well you began but how determined you are to end well. You might have the worst day ever, caught up in sin and other distracting activities, but Christ calls you today into his warm welcoming open arms (Luke 15: 4-7). Join the Christ family before it becomes late. While the foolish virgins went to buy the oil in town, the bridegroom appeared and took away those that were ready, prepared and watchfully expecting his glorious appearance (Matthew 25:1-10).

How then shall we escape if we neglect so great a salvation? (Hebrews 2: 3) Those who will find themselves left will have to deal with the antichrist system; for he shall cause great and small, rich and poor, free and bond, to receive a mark; and that no man can buy or sell, unless he has the mark or the name of the beast or the number of his name (Revelation 13:16-17). Remember the false prophet will be the enforcer. Escaping this dreadful day ahead is the only way to be safe. Christ provides this safety, Praise the Lord!!  Will He find you ready when He appears the second time, suddenly, in a twinkling of an eye? Will you be on time, in time, early, a minute or seconds late? Run to the place of refuge that is only found in Christ, so the wind of damnation does not blow you out of the right path.  Repent of your sins now in your heart and confess with your mouth and do not return to the place of destruction, remember, Mark 16:16). The Lord and our Savior Jesus Christ is coming in a time, you would not expect and the time is here! Be ye convicted in your hearts and be ye ambassadors of Christ.

Repent of your sins by coming to the Cross of Calvary on your knees. Say Lord Jesus, I am a sinner and have come asking for forgiveness, wash me with your precious blood and blot away all my sins. I accept you as my Savior and I am asked for your mercy, that from now you come into my life and be my Lord and my God. Get to a small Bible believing church, confess to your family and friends and whosoever will listen that Jesus Christ has saved and changed you and your direction (evangelism/witnessing). Start reading your standard King James Bible for the gospel of John. Get baptized by immersion in the name of the Lord Jesus Christ only. Ask the Lord for fill you with the Holy Ghost. Fasting, prayer, praising and giving are part of the gospel. Then study Colossians 3:1-17, and get set for the Lord in the translation.

Grace and peace from Our Lord and Savior Jesus Christ be multiplied unto you.

TIME IS RUNNING OUT, JOIN THE TRAIN NOW!!!