The hidden judgment revealed – To those with wisdom 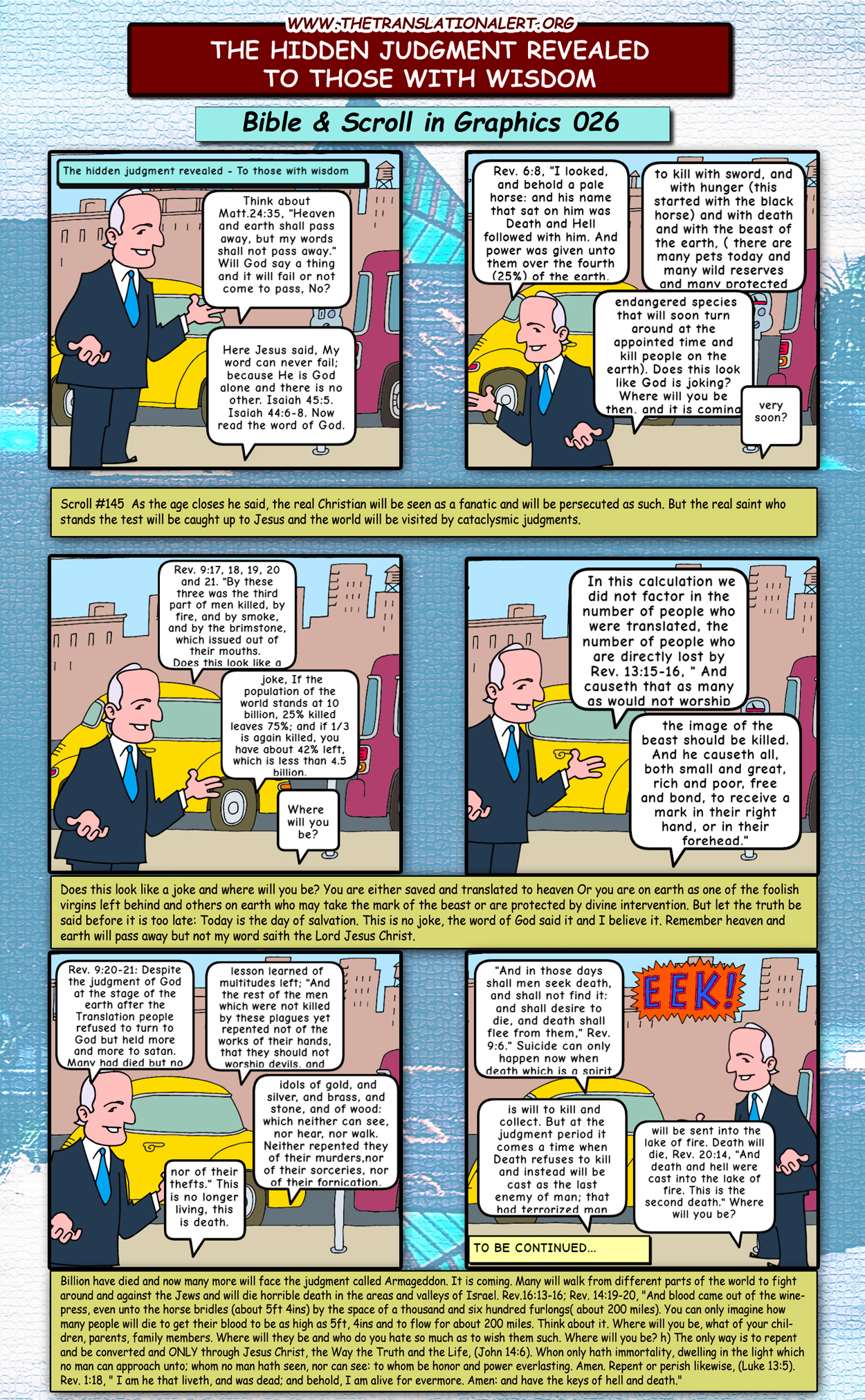 Think about Matt.24:35, “Heaven and earth shall pass away, but my words shall not pass away.” Will God say a thing and it will fail or not come to pass, No? Here Jesus said, My word can never fail; because He is God alone and there is no other. Isaiah 45:5. Isaiah 44:6-8. Now read the word of God.

a) Rev. 6:8, “I looked, and behold a pale horse: and his name that sat on him was Death and Hell followed with him. And power was given unto them over the fourth (25%) of the earth, to kill with sword, and with hunger (this started with the black horse) and with death and with the beast of the earth, ( there are many pets today and many wild reserves and many protected endangered species that will soon turn around at the appointed time and kill people on the earth). Does this look like God is joking? Where will you be then, and it is coming very soon?

c) In this calculation we did not factor in the number of people who were translated, the number of people who are directly lost by Rev. 13:15-16, ” And causeth that as many as would not worship the image of the beast should be killed. And he causeth all, both small and great, rich and poor, free and bond, to receive a mark in their right hand, or in their forehead.”

d) Does this look like a joke and where will you be? You are either saved and translated to heaven Or you are on earth as one of the foolish virgins left behind and others on earth who may take the mark of the beast or are protected by divine intervention. But let the truth be said before it is too late: Today is the day of salvation. This is no joke, the word of God said it and I believe it. Remember heaven and earth will pass away but not my word saith the Lord Jesus Christ.

e) Rev. 9:20-21: Despite the judgment of God at the stage of the earth after the Translation people refused to turn to God but held more and more to satan. Many had died but no lesson learned of multitudes left; “And the rest of the men which were not killed by these plagues yet repented not of the works of their hands, that they should not worship devils, and idols of gold, and silver, and brass, and stone, and of wood: which neither can see, nor hear, nor walk. Neither repented they of their murders,nor of their sorceries, nor of their fornication, nor of their thefts.” This is no longer living, this is death.

f).”And in those days shall men seek death, and shall not find it: and shall desire to die, and death shall flee from them,” Rev. 9:6.” Suicide can only happen now when death which is a spirit is will to kill and collect. But at the judgment period it comes a time when Death refuses to kill and instead will be cast as the last enemy of man; that had terrorized man will be sent into the lake of fire. Death will die, Rev. 20:14, “And death and hell were cast into the lake of fire. This is the second death.” Where will you be?

g) Billion have died and now many more will face the judgment called Armageddon. It is coming. Many will walk from different parts of the world to fight around and against the Jews and will die horrible death in the areas and valleys of Israel. Rev.16:13-16; Rev. 14:19-20, “And blood came out of the winepress, even unto the horse bridles (about 5ft 4ins) by the space of a thousand and six hundred furlongs( about 200 miles). You can only imagine how many people will die to get their blood to be as high as 5ft, 4ins and to flow for about 200 miles. Think about it. Where will you be, what of your children, parents, family members. Where will they be and who do you hate so much as to wish them such. Where will you be?

h) The only way is to repent and be converted and ONLY through Jesus Christ, the Way the Truth and the Life, (John 14:6). Whon only hath immortality, dwelling in the light which no man can approach unto; whom no man hath seen, nor can see: to whom be honor and power everlasting. Amen. Repent or perish likewise, (Luke 13:5).

Scroll #145  As the age closes he said, the real Christian will be seen as a fanatic and will be persecuted as such. But the real saint who stands the test will be caught up to Jesus and the world will be visited by cataclysmic judgments.

026 – The hidden judgment revealed – To those with wisdom in PDF